Red Beach is part of the Hibiscus Coast which is about 30 minutes from Auckland and now is only 5 minutes away from the Millwater motorway on ramp.

“Red Beach is a suburb surrounding the beach of the same name on the Hibiscus Coast, Auckland, New Zealand, at the base of the Whangaparaoa Peninsula. The suburb of Silverdale is to the south-west, and Orewa to the north. 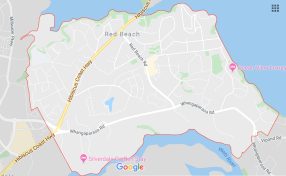 The beach is on the Hauraki Gulf and the suburb is bounded by two estuaries, that of the Weiti River to the south and the Orewa River to the north. The population was 6,432 in the 2013 census, an increase of 525 from 2006.[1]

Phil Yang is a qualified 'A Buyer's Choice House Inspector for Auckland, North Shore and Rodney. A report covers all aspects of the house. View all posts by Phil Yang