Westmere and Point Chevalier are
some of the Auckland areas for which
Phil Yang, a qualified “A Buyer’s Choice” House Inspector,
provides her services.

For more information about Point Chevalier and Westmere
scroll past the map. 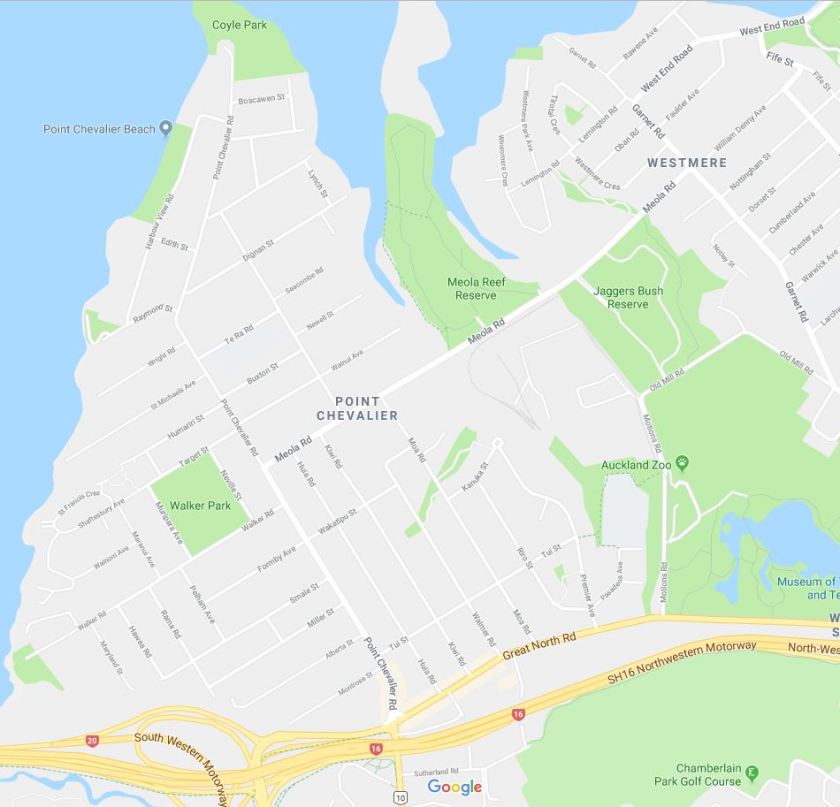 Point Chevalier is a suburb and peninsula in the city of Auckland in the north of New Zealand. It is located five kilometres to the west of the city centre on the southern shore of the Waitematā Harbour.

The suburb stretches from the town centre / shopping area of the same name on its southern edge (Great North Road, and near the SH16 motorway) to the tip of the peninsula in the north.[1] Its postcode is 1022.

The suburb is situated to the north of State Highway 16 and the campus of Unitec New Zealand and to the west of the suburb of Western Springs. It is largely sited on the triangular peninsula, which extends north into the harbour for 1800 metres. The soil is mostly clay without the overlay of volcanic material which covers much of the Auckland isthmus; this means the vegetation of the area is less lush than some of the other suburbs of Auckland.

Visible from Coyle Park is Meola Reef, which is situated to the east of the Point Chevalier peninsula and bordering the suburb of Westmere. Meola Reef is an outcrop of black basalt rock which extends some distance north into the Waitematā Harbour. This is the end of the lava flow emanating from Te Tatua-a-Riukiuta, a volcano several miles south of this area. Formerly a landfill site, it has now been rehabilitated as a park and nature reserve. Other parks in the suburb include Walker Park, Eric Armshaw Reserve and Coyle Park. The latter is located at the northern tip of the peninsula.”